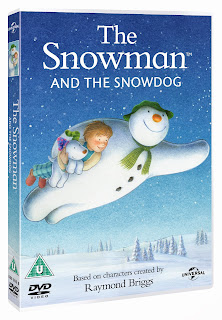 Rediscover The Magic Of Christmas

This Christmas, relive the enchanting animated story of The Snowman and The Snowdog, available on DVD and Blu-ray™ for the first time on 4th November 2013 from Universal Pictures (UK). Brought to you from the team behind the classic children’s picture book and animated film The Snowman, the DVD is also available on boxset and includes the wonderful Oscar®-nominated original. What better time of year to share the tender tale that reunites fans to The Snowman and introduces a new best friend, The Snowdog?
The Snowman and The Snowdog beautifully captures the magic and excitement of the original film as well as being a heart-warming story about love, loss and friendship. When a young boy, Billy, moves house, he discovers a secret box hidden under the floorboards – a snowman-making kit! Billy builds his snowman and, with a little spare snow, a Snowdog. At midnight, The Snowman and The Snowdog magically come to life. Join Billy on the most amazing adventure, as they fly over London to the North Pole and compete with an assortment of colourful characters in a very special race. On return, Billy must leave his new friends outside and return to bed – but first, a wonderful surprise awaits him…
Written by Hilary Audus and Joanna Harrison, and directed by Audus, both of whom worked as animators on the original film, The Snowman and The Snowdog was created to mark the 30th anniversary of the original film and is a Lupus Films production.
Featuring a brand new soundtrack from former Razorlight drummer Andy Burrows, the official single ‘Light the Night’ is played during the flying sequence to dramatic effect, whilst the film’s traditional hand drawn technique helps it remain true to the original.
Make someone’s Christmas as delightful and unforgettable as the first time you met The Snowman, with The Snowman and The Snowdog on DVD and Blu-ray™ from 11th November 2013.
I have been given three copies of The Snow man and The Snowdog to be given away in a competition to 3 of my lovely followers
To be in with a chance of winning please Enter through the Rafflecopter below: