DISCOVER THE ULTIMATE FAIRYTALE MUSICAL!™ ADVENTURE WITH BARBIE™ AND THE SECRET DOOR 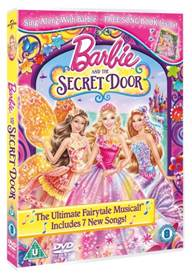 AVAILABLE ON DVD FROM 1ST SEPTEMBER 2014
Includes Barbie™ Song Book
Experience magic and music this September with The Ultimate Fairytale Musical!™, Barbie™ and The Secret Door, released on DVD from 1st September 2014.

Barbie™ stars as Alexa, a shy princess who discovers a secret door in her kingdom and enters a whimsical land filled with magical creatures and surprises. Inside, Alexa meets Romy and Nori, a mermaid and a fairy, who explains that a spoiled ruler named Malucia is trying to take all the magic in the land. To her surprise, Alexa has magical powers in this world, and her new friends are certain that only she can restore their magic. Discover what happens when Alexa finds the courage to stand up for what’s right and learns that the power of friendship is far more precious than magic.
Featuring seven new songs, this enchanted musical is set to have little ones singing along as they can follow the in-pack song book and join Alexa on her magical, musical journey.


Barbie and the secret door is one of our top fairy tales this year its so full of life, colour and happiness. When I sat down with my daughters Davina and Michaela to watch it I have to say I could watch it over and over again its magical.
Both my girls and I love Barbie Alexa and how she saves all her friends from the mean and spoilt Malucia who steals all their magic. Davina and Michaela have watched it so many times they now know all the words and sing along with Alexa when she sings her magic song. Barbie and the secret door is such a beautiful fairy tale which leaves you feeling warm and fuzzy inside, I felt myself smiling all the way through.
We give Barbie and the secret door 5/5