Schleich are releasing some super cool high quality products as part of its Eldrador Creatures brand and were so excited to be reviewing Kraken one of their real super fighters who lives in water.
The brand- new monsters and beings from Eldrador Creatures lave,ice,water and stone worlds off plenty of action-packed fun.
There are 12 new and very dangerous-looking figurines seeking to win the super weapon back from the evil forces. 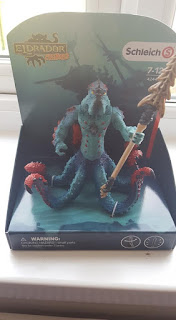 The Kraken is a real super fighter - he has several tricks up his sleeve to hold back his opponents. With his strong tentacles, he can take on several opponents at once, he can squirt jet-black into their faces blinding them, and using his harpoon, he can keep uninvited guests at bay - even those from the air !
But anyone who thinks that his only as quick as lighting under water is most definitely wrong. The Kraken can also fight his opponents on land! But how does he do this? He can not only move extremely fast on his tentacles, but is also super quiet - as if on tiptoes - and hardly leaves a trace. No one is safe from him anywhere...His only weakness is that the monster kraken needs water after an hour at least, otherwise he is at risk of drying out. 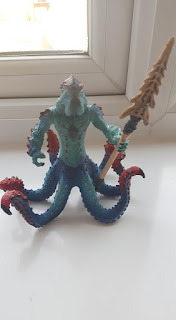 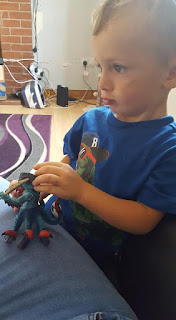 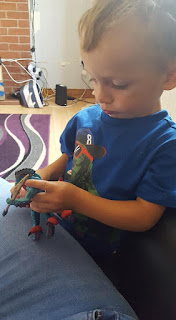 Our thoughts- Callum is now aged 15 but your never to old to be interested in figurines, he loved the new Monster Kraken as he thought he looked really cool with his movable areas and weapon you can removed and swap with another.
Callum has very good eyes for detail and he said he the high quality paintwork is a amazing it makes each figurine look like its for the older generation as in the more older children and adults. Even though Callum is 15 and the Eldrador Creatures are for ages 5 and above that has not prevented him from wanting to collect more from the Eldrador Creatures range, you could even add play sets to add to the fun. Callum showed his younger brother Rhys who is soon to be 2, they both loved it and had so much fun sharing it, Rhys would run around the house pretending to attack objects around him. I can honestly say both boys have taken pretty well to our new Monster Kraken from Schleich and are looking forward to adding many more to their collection this Christmas. At an affordable price of £13.99 i couldn't really moan as they really are good quality figurines for the money and perfect for children who love to collect toy too.