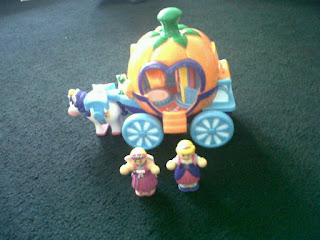 A few weeks ago I asked WOW Toys if i could review one of the fabulous toys, we was so happy when we received  an email says yes we would be able to review a toy. We was so excited when waiting for the toy to arrive as we wasn't told which toy we would be testing so it was a surprise for my children when the toy was delivered. We received Pippa's Princess Carriage which both my girls fell in love with , they couldn't wait for me to get it out of the box.
My daughters Michaela 5 & Davina 11 months took in turns playing with Pippa's Carriage it was nice to see them both playing together even though Davina would crawl of with the pieces (hehe).
WOW Toys come in a lovely colourful packaging which i found very eye catching.
Stated on the box was lots of information about child development which your child develops when playing with WOW Toys.. For example
Aged 1+  Your child will be learning Sensory stimulation & fine motor skills
Gross motor skills & eye co-ordination.
2+ Discovery & Learning
2 an half + Social Interaction
3+ Role-Play & Exploration
I think its great news to learn that my children are learning when playing with there toys.

My girls love playing with Pippa's Carriage they've played hourly. When i finally got chance to take a look at the toy i found it was very well made and robust so it is really safe for my little girl who is 11months at the moment the box states this toy is for ages 1-5 year i was so amazed to see my daughter Davina trying to put the Pippa figure in the carriage and pushing it around the floor. 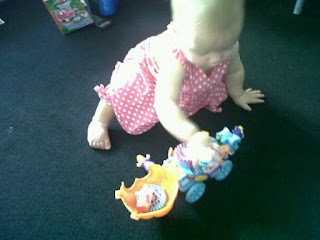 Pippa's Carriage has special functions which do not require batteries so your child can have so much fun and you will never have to worry about having to change the batteries.
Pippa's Carriage has realistic clippety-clop sounds and a lid which reveals Pippas dressing room which has a magic mirror that changes when you stand Pippa in front and turn her and the picture changes.

Check out there website where they have more fun & exciting toys !