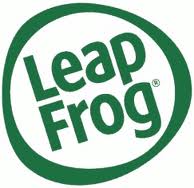 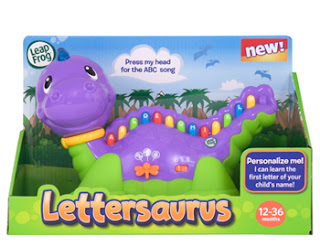 Roar, sing and learn letters with Lettersaurus the dinosaur pal that helps your children explore letter names, letter sounds, colours and music.
Each press of the 26 colourful letter buttons on his back rewards children with a familiar tune, and pressing his head lets them sing along to the Alphabet Song.
You can even make letter learning a personal experience. By adding in the first letter of your child’s
name they will hear a personalised response when they press that letter e.g “L! That’s the first letter of your name!”


We buy a lot of Leap frog products as they are not only fun and exciting i find my children learn so much form the Leap frog products, We've have got My Pal Violet ,Shapes & Sharing Picnic Basket, Baby Counting Pal Soft Plush Toy, Twinkle Twinkle Little Violet and my older daughter Michaela has the leap frog Tag Reading System-Pink cant you tell we are big fans of Leap frogs products.
As a big fan of their products i jumped at the chance to try one of their New products which was the Lettersaurus dinosaur pal which Davina has had so much testing.
When it first arrived i didn't even get chance to take it out of the packaging before Davina had whisked it away.
Davina is now 17 months old and knew straight away what to do once i had turned the dinosaur pal on, she began pressing the brightly coloured letters giggling and rocking to the music.
Once she had finished playing i took it out of the packaging to find a card attached to the bottom with STOP in big letters to let me know i had to visit the leapfrog website to set and personalise the first letter of Davinas name so when Davina then pressed the letter D in the ABC mode the Lettersaurus dinosaur will the then tell Davina that D is the first letter of her name.
I found personalising it was really easy to do all i  had to do is turn it off them press letters L and M at the same time while switching the Lettersaurus back ON, whilst still holding L and M it will then you your in parent mode i then pressed the first letter of my daughters name i then let go of all buttons. After you have pressed the letter of your child's name it will ask you to press it again to confirm, you then switch it back off and on again to go back to play mode its really that simple no wire or registration needed.

Davina loves to press the dinosaurs head and dance to the alphabet song while clapping her hands, i thinks its a great way for your children to learn not on only will they learn the alphabet they will also learn colours too.
Over all i think its a lovely toy has lots of different features is a nice size and not to heavy for your little ones to pick up or carry around with them.

Its also a great value for money i would recommend this to anyone wanting to teach their little ones the Alphabet, Colours and Motor Skills in a fun and exciting way. 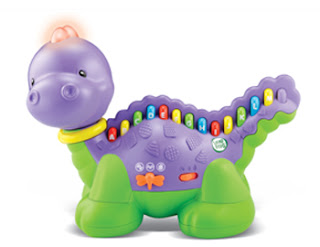 Parents can connect to the online LeapFrog® Learning Path for customised learning insights and ideas  to expand the learning.


Appropriate for children ages 12 to 36 months

We were given the Lettersaurus Dinosaur Pal for free for the purpose of this review but this review is all mine and my own honest opinion.
- April 06, 2012