Top Board Games for Easter Half Term University Games

Top Board Games For Easter Half Term including Bunny Jump, Googly Eyes and Yeti In My Spaghetti

Easter half term is just around the corner and University Games has pulled together its top games to keep the family entertained across the Easter holidays. Whether it’s stealing carrots from the bunny’s burrow, drawing with googly glasses or naming the first three things in 5 seconds… University Games has something to suit all ages.

Over the weekend 4 out of my children Callum, Michaela, Davina and little Katelyn have been testing two of University's Games board games. We was sent Yeti in my spaghetti and Word has it !. Both games were equally fun but the all time fave was word has it ! there was lots of laughter with this one as some of the word created were just so funny. First of all they decided to play Yeti in my spaghetti which was quick and easy to set up by placing the plastic spaghetti pieces Cris cross over a bowl provided and the the Yeti placed in the middle of the bowl on top of the spaghetti each person then took in turns to take a piece of spaghetti from under the Yeti with out making him fall in to the bowl which then means you lose the game.

Secondly they played Word has it ! which I couldn't resist and had to join in helping Davina make words. The object of the game is to make the longest word you can when each player takes a turn of picking up a word has it card, underneath each card has a sentence like for example (something blue) which you then have to spin the dial on the board provided which reveals a letter for Example (B), each player then needs to think of a longest word of something blue beginning with B. Seems easy doesn't it not when you have just 40seconds on the clock to think, find your letters and build your word with out knocking it over like we did a few times. You also get an extra time card and any letter card to help you.The race against time has you in a panic but we had so much laughter at the same time which was so lovely its something haven't done in a long time. We had so much fun trying out both games it gave us family quality time together and will defiantly have fun playing them over the Easter holiday.

Yeti in my spaghetti 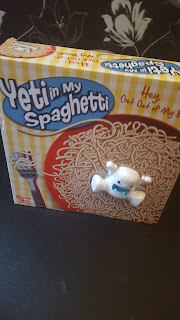 This game is as crazy as it sounds… Take turns to carefully pull away the squiggly spaghetti sticks from the bowl, but be careful not to let the yeti that is sat balancing on top tumble into the bowl. As the intensity rises with each draw of spaghetti, the player who makes the yeti fall is the looser! 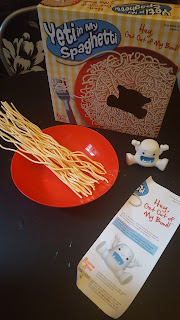 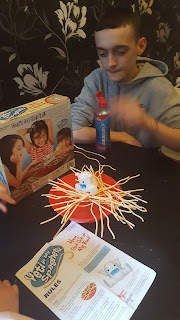 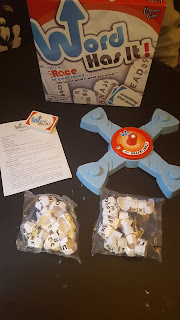 Challenge the wordsmiths in the family to this race at great speed... the tallest word is what you need!
This new word game from University Games is sure to put the fun on the rise - simply create the tallest word under the time limit to win!