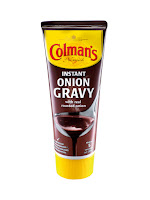 Colman’s launches instant gravy with real meat juices
When i was first offered Colman's instant gravy paste to try the first thing that popped into my head was mustard and i do not like mustard, then i saw the word gravy and i thought it would definitely be worth a try as i love gravy. I think its nice to try something new now and then having used the same gravy brand for a while. When they arrived there were three different flavours these were Colman's instant onion gravy paste, beef gravy paste and chicken gravy paste.
Having now tried Colman's Instant onion gravy i must admit it tastes nothing like mustard (he he) but what it does contain is real meat juice which adds a delicious flavour to to they gravy.
It’s fair to say that gravy is a national passion whether poured on bangers & mash, or splashed on a Sunday roast, many meals are simply inconceivable without it!
We tried our Colman's instant onion gravy on our Sunday roast and found it was really  delicious and tasty, full of flavour and had no lumps, its really simple to make you just squeeze 2 heaped teaspoons of pastes into a jug, Add 250mls of boiling water and stir continuously with a hand whisk but we didn't have one so we used a fork, you whisk for 30 seconds allowing the gravy to thicken.
Colman's 130g squeeze tubes are available in all major UK supermarkets and are
available in three delicious flavours – beef, chicken and onion,Colman’s Instant Gravy Paste looks set to become a firm family favourite. The innovative new paste format – replacing traditional gravy granules – makes it quick and easy to use, enabling Mum to make great tasting, hearty, authentic, homemade gravy in an instant which is great for us busy mums.
Colman's instant gravy paste is free of any nasty preservatives and artificial flavour enhancers.
They are priced at (RRP) £1.59 which provides approximately 5 servings.
﻿
- November 09, 2011