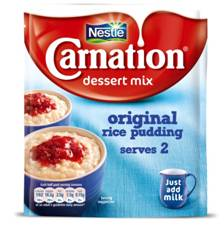 Nothing compares to a mouth-watering bowl of traditional rice pudding. Brits just can’t get enough of this sweet treat, which is one of the UK’s top ten desserts. But if you want the real thing, making it from scratch can take a long time.
This is why Nestlé Carnation, the experts in all things creamy tasting and delicious, are launching a new range of scrumptious rice puddings, which taste just like homemade, but can be prepared in just 10 minutes.
The Nestlé Carnation Rice Pudding range showcases four varieties - Original, Cinnamon, Chocolate and Caramel.
Each packet contains a dessert mix, which transforms into a creamy tasting, homemade dessert by simply adding fresh milk, whisking and heating in the microwave or on the hob.
The different varieties in the Nestlé Carnation Rice Pudding range taste great on their own – but you can also try adding fruit, a spoonful of homemade jam or even a few chocolate sprinkles as a treat. Or try using Nestlé Carnation Evaporated Milk to create an even creamier tasting pudding.
The range is free from artificial colours, flavours, preservatives and sweeteners. The Original, Cinnamon and Caramel varieties are also low in fat.1 Each pack contains enough rice pudding to make two servings, and has an RRP of 79p per sachet.
We was sent two yummy flavours to try Original and Chocolate, We have never tried Chocolate rice pudding before so this was a first for us, my son Callum doesn’t like rice pudding but decided he would have a try too and compared to the Original rice pudding he really did enjoy it.  I thought the rice pudding was really easy to make and very tasty too just add you rice pudding mix into your sauce pan, then add your milk whisk away leave to stand off the heat then whisk some more and serve Yes !! it’s that simple and delicious too. I think it was creamy with just the right balance of chocolaty flavour so it wasn’t to over powering, which I think can leave you feeling sick and bloated.  We also added a few chocolate shavings to the top of our rice pudding to add a little detail. 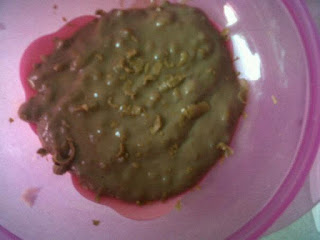