Are kids growing up to quickly for their age !! 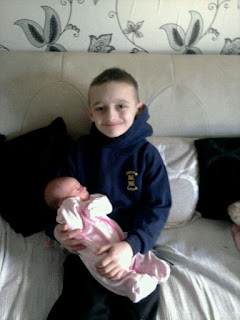 My son Callum aged 8 will be 9 years old in June and I'm really stuck on choosing a present for him as he never seems to play with toys any more, Callum asked for a wrestling ring for Christmas just gone and he only played with it Christmas day now its barley been touched. My children have so many toys but seem to want do older things like play on the laptop, play game consoles, I pads Dsi that all seem to be the kids biggest crave but what age would you let your children play on things like that don't get me wrong an hour at most maybe I would allow them but they seem to have a strop when it comes to me saying you can come of now and play something else. When I was younger I had a Sega mega drive but I wouldn't play it for very long. Callum my eldest child and only boy and I don't like to stop him from doing or playing the things he enjoys I just wish there were some toys out there that will bring a little more excitement in his life.Callum already thinks he’s Mr independent but I worry so much about him I feel I wrap him up in cotton wool and he’s going to turn out really soft, I'm dreading secondary school not because I feel he won’t be able to look after himself but because he’s my baby boy no matter how old he is he will always be my baby and the world can be a scary place.
Do I worry too much or are most children the same?
Do you have an 8 Year old ?
What kind of things do they like to play ?
- March 09, 2012